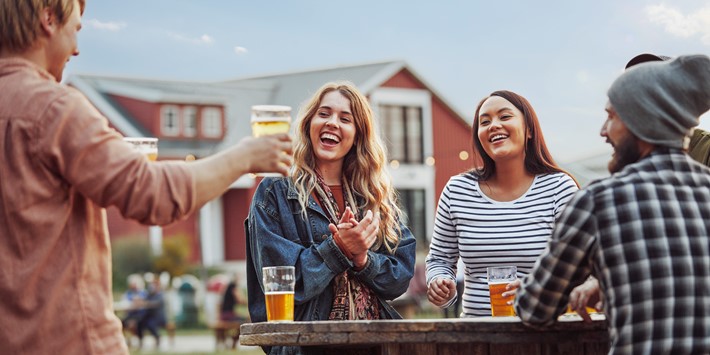 It’s always a good time in Wisconsin to spend the day surrounded by friends with a craft beer in hand. But there’s something about autumn that makes moments like that more golden. Being outside under the trees’ kaleidoscope colors — it’s extra special, and Wisconsin does it best. Here, we’re always down to celebrate so there’s no need to travel far to find some craft-drink-autumn magic. Raise a glass to good times at one of these six beer and wine festivals this fall.

No, that’s not the beer talking — there really is a troll strolling around this beer festival that features 30 brewers and over 100 craft microbrews and ciders. Jorgen the Troll is Mount Horeb’s mascot, and he makes special appearances here, along with live music acts, food carts and beer.

Ready for a mind-boggling amount of beers to sample? This can’t-miss event is held on the shores of Lake Michigan, and it features nearly 100 brewers and more than 400 craft beers, ciders and hard seltzers to taste test with friends. Local restaurants will sling food, and there’s unforgettable live music featured every year.

Celebrate fall and its bounty at this family-friendly celebration. Not only are Cedarburg-based Cedar Creek Winery’s wines the centerpiece of this fest, but great food awaits in the festival’s food court with barbecue, gyros, seafood, noodles and good old American cuisine, like brats and cheese curds. Plus, peruse the farmers’ market, join the grape stomping contest or sip a beer in the beer garden by Cedarburg’s own Fermentorium, a brewery and tasting room.

Walk the bourbon trail, experience wine country and try hundreds of craft beers at this fall festival. What was one the Northern Wisconsin Craft Beer Festival, Craftoberfest has rebranded and expanded to include a variety of wine and spirits alongside featured breweries and their craft beers. This year, there will be live polka music, a best beard competition and many more activities.

A Madison-area tradition, this beer party celebrates at the historic Quivey’s Grove and Stable Grill property. Sample delicious beers from over 20 breweries and listen to great tunes, too. But our favorite part is the tasty food prepared by Quivey’s — nibble on a Bavarian bratwurst, pulled pork sandwich, hot soft pretzel or some of Wisconsin’s iconic cheese curds.

A list including beer festivals in Wisconsin can’t be complete without the longest running Oktoberfest in the states. It’s a spirited 4-day celebration of Wisconsin’s German heritage with music, food, friends, beer and much more. But if you’re most interested in the beer, don’t miss the festival’s Craft Beer Night. Enjoy samples from over 40 breweries and get to know the brewers themselves.